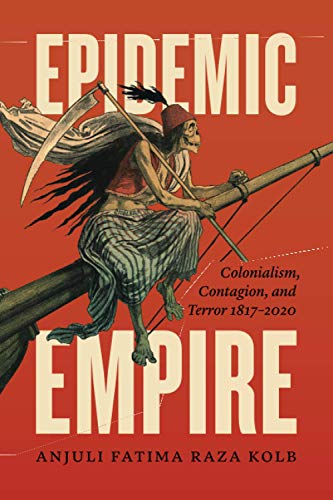 The book will be of interest for post-colonial studies as a background to counter-extremism, and for those concerned with the presence of Prevent in healthcare (see Related Resources below).

Raza Kolb argues that for more than a century, this metaphor has figured in literary works, positioning insurgent violence as contagion, specifically in order to contain its political energies.

The book looks at how this trope began in responses to the Indian Mutiny of 1857 and tracks its tenacious hold through 9/11 and beyond.

It is the first book-length study to approach the global War on Terror from a postcolonial literary perspective.

Exposing the long history of this broken but persistent narrative, Epidemic Empire is “a major contribution to the rhetorical history of our present moment”.

The book is available on Amazon.

“The book’s achievement lies in its multifaceted study of health as a meaning system. This meaning system is not new, but its historical legacy in colonial and post-colonial projects is substantial.” – Tarek Younis, LSE Books.

Anjuli Fatima Raza Kolb and Leela Gandhi in conversation on By the Book, the University of Chicago Press channel.