The original stories that were propagated:

Many articles tried to put the story straight:

The Trojan Horse affair epitomises many of the questions and concerns expressed elsewhere about the changing school landscape and the overlapping roles of the organisations responsible for oversight of schools. No evidence of extremism or radicalisation, apart from a single isolated incident, was found by any of the inquiries and there was no evidence of a sustained plot nor of a similar situation pertaining elsewhere in the country. Our report therefore covers the response of the Department for Education and Ofsted to the situation and wider lessons for the school system.

The number of overlapping inquiries contributed to the sense of crisis and confusion, and the number of reports, coming out at different times and often leaked in advance, was far from helpful. The scope for coordination between inquiries by the Education Funding Agency, Ofsted and others is restricted by their statutory roles but more coordination could and should have been achieved. All the reports included recommendations that went far beyond the situation in the particular schools concerned and the DfE should draw together the recommendations from all the investigations and set out its response.

OFSTED reports prior to 2014 for Oldknow and Park View Academy are no longer on the DfE website.

OFSTED reports prior to 2014 for Oldknow and Park View Academy are no longer on the DfE website.

The OFSTED Inspection Report January 2012 in which Park View was awarded the highest score in all categories and judged outstanding is here.  An interim Report from 2010 is here,  a Full report from 2007 is here, and that from 2001 is here.

The reports show a consistent trajectory of improvement between 2001 and 2012. In addition, they show that it is false to claim that the school was not properly inspected between 2007 and 2014 is incorrect. It had a full inspection in 2012, carried out under Michael Gove’s new, ‘more rigorous’ inspection regime. Head of OFSTED, Sir Michael Wilshaw, claimed on its basis that all schools should be like Park View.  Read about it here.

Acknowledgement: Many thanks to John Holmwood for input to this. 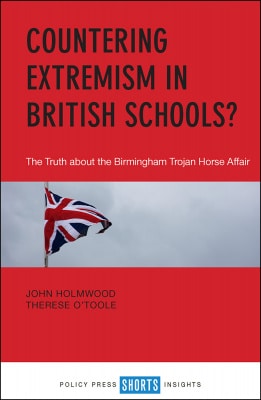 In 2014 an investigation into an alleged plot to ‘Islamify’ several state schools in Birmingham began. Known as the ‘Trojan Horse’ affair, this caused a previously highly successful school to be vilified.

Holmwood, an expert witness in the professional misconduct cases brought against the teachers, and O’Toole, who researches the government’s counter-extremism agenda, challenge the accepted narrative and draw on the potential parallel with the Hillsborough disaster to suggest a similar false narrative has taken hold of public debate.

This important book highlights the major injustice inflicted on the teachers and shows how this affair was used to criticise multiculturalism, and justify the expansion of a broad and intrusive counter extremism agenda.

PROP: The Trojan Horse Affair is key to understanding why government’s idea of ‘British Values’ is wrong