The ‘Science’ of Pre-Crime and Counter-Terrorism: The Secret Study under Prevent 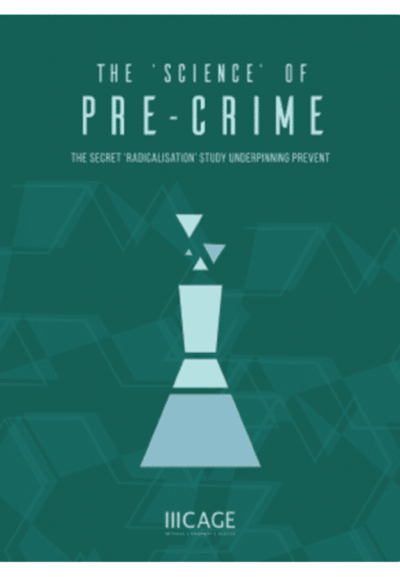 One of the earliest and most effective interrogations of pre-crime predictive tools within the framework of counter-extremism, this report is a must-read for all involved in calling for an end to Prevent.

Authored by CAGE released in September 2016, revealed how the UK government uses a system of 22 factors known commonly as the ERG22+ to identify “extremism”.

The factors were derived on the back of a study conducted on a small group of non-violent terrorism offenders, to gauge their thought processes and identify certain behavioural indicators.

The report details for the first time how the government produced these factors in secret, and subsequently relied on an evidence base that was not only unproven, but was not for general use.

The study that produced the ERG 22+ tool was conducted for the National Offenders Management Service (NOMS) – now known as the HM Prison and Probation Service – by researchers Monica Lloyd and Christopher Dean in 2015, and was published in the Journal of Threat Assessment and Management.

The tool that was developed was done so as a risk-assessment, predictive tool for prisons.

Ethical questions abound when this is applied through Prevent, to the wider populace, tertiary education and even young children.

Further, the CAGE report underlines that even UK government’s study states that only trained professionals should be using the ERG 22+ tool.

This was echoed more recently in a 2021 study by the European Commission entitled Risk Assessment in Prisons, which analysed the ERG 22+, as well as the VERA-2R, the RRAP, the IR46, and the RADAR-iTE in pre-crime prediction in prisons only.

Even in the context of the prison population, this study cautioned that “only fully qualified forensic psychologists or experienced probation officers with practice in using structured professional guidelines should employ the ERG22+”.

It also stated that “it should be clear from the very beginning that mathematical prediction is not possible” and that “it seems advisable not to confuse extremism with people who have discovered or started to practise their faith: the existence of false-positive cases and arbitrary conclusions must be clearly avoided”.

However, the ERG22+ has been rolled out across the British public sector, meaning it is effectively employed nationally across UK society, under the Counter-Terrorism and Security Act 2015.

This CAGE report details how this happened and asks why.

This report is especially important because the ERG 22+ continues to be the backbone of the Prevent referral process. It is used by over 500 000 public sector workers trained through a brief and vague 20-minute presentation that is part of highly Islamophobic Prevent training leaked in 2016 and reported in The Guardian, to help them report individuals, including children, to counter-terrorism.

Reviewed by 18 academics, this is one of CAGE’s most robust reports. It was supported by a joint letter by 140 academics that called for the full ERG22+ study to be published and publicly scrunitinised, as originally proposed by the Royal College of Psychiatrists, and followed up by their own report into Counter Terrorism and Psychiatry.

Notably, these academics also said: “All those engaged in academic study should continue to serve the interests of society by remaining faithful to the ethical standards and science of their traditions.”

You can read the full CAGE report HERE.