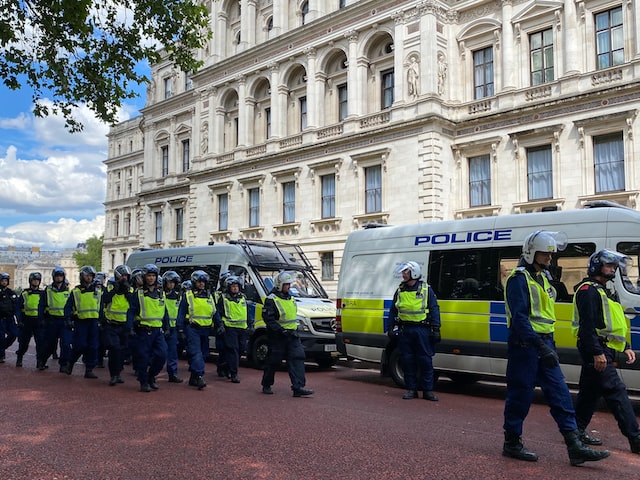 Pro-Prevent lobby groups are currently arguing that the focus of Prevent should be redirected toward Islamism and away from the far-right, but is this just an excuse to play down their far-right agenda?

The argument that Prevent is ‘failing’ and that it needs to refocus on so-called ‘Islamist extremism’ should be viewed in light of the ostensible justification of the ‘British values’ underlying Prevent.

When ‘British values’ are linked to ‘national security’

The need to teach ‘British values’ as conceived by the government, frames the implementation of the Prevent pre-crime programme in schools.

These values – on paper – are democracy, rule of law, individual liberty, mutual respect and tolerance of different religious faiths and beliefs.

Their designation as ‘British’ is, of course, problematic. It implies that these ‘British values’ must be inculcated in ethnic minority citizens, yet we have seen that the claim is that most British Muslims share them.

This notion was hatched on the back of the Birmingham Trojan Horse affair, a dubious basis on which to base any notion of ‘British values’, let alone one held by those in authority (we’ve blogged about this here).

The issue with the government’s notion of ‘British values’ is what ideology is at the root of them.

Robin Simcox, formerly director of the Countering Extremism Group – a hard-right profit-making group benefiting from ‘dark money’, according to a recent investigation by the Byline Times – is now designated head of the  Commission for Countering Extremism.

Simcox wrote shortly after his initial appointment that, it is necessary,

“not to confuse mainstream conservative political positions with the far-right. Certain far-right terrorists speak about the need to defend Western values and freedoms and warn that immigration undermines culture. Yet while the far-right does indeed care deeply about such causes, so do vast amounts of other people … Meanwhile, the link between immigration and culture remains a live subject in Europe … Assessing those positions to be ‘extremist’ just because the far-right commandeers them, is a sure-fire way to ensure that any policy designed to tackle this ideology will not command widespread support”.

Of course, since Prevent is concerned with precursor ‘ideologies’ to those espousing violence, then ‘anti-immigration’ and the espousal of ‘replacement theory’ are by its own definition, extremist.

They will also be experienced as such by ethnic minority communities, perhaps especially those of British Muslims.

But what the statement indicates is that the support that Simcox is concerned with securing does not include British Muslims.

Our talk coincides with a new government with a radical right-wing and populist agenda. The setting out of this agenda has been delayed by the death of the Queen and the suspension of politics-as-usual.

However, the new Home Secretary, Suella Braverman, had already given clear indications of her intended direction of travel, and that she plans to double-down on the policies of her predecessor.

As part of her own bid for the leadership of the conservative party, she has stated her interest in withdrawing from the European Convention of Human Rights (something also proposed by Policy Exchange in their submission to the consultation on the Human Rights Act).

According to Braverman, ‘rights’ should not be allowed to deny ‘democracy’.

This involves the view that the majority can legitimately over-ride the rights of minorities, and, at the same time, this argument claims the executive as the embodiment of the will of that majority. It is authoritarianism.

The new home secretary – in her role as attorney-general – has also previously declared her wish to curb the powers of what Boris Johnson initially termed ‘lefty lawyers’.

One target has been lawyers acting for civil liberties organisations, but another is lawyers within the government service. She was responding to the reports that lawyers within the Home Office were delaying the publication of the report of the Shawcross review of Prevent.

In stating this, she then argued that the purpose of the government legal service was not to ensure that government action was within the law, but also to secure the will of government.

The policy spiral of Prevent is being tightened and its function now is to give torque to a right-wing and populist agenda of government.

This agenda is seemingly at odds with the substance of the ‘British values’ it formally espouses.

This is the second snippet from a talk given as part of the Scarman Lectures at the University of Leicester by Layla Aitlhadj and Prof. John Holmwood. View their full lecture here.

Source: How Prevent disguises far-right influence in government – The People’s Review of Prevent

Photo by John Cameron on Unsplash.