Human Rights and the Globalisation of Counter Extremism 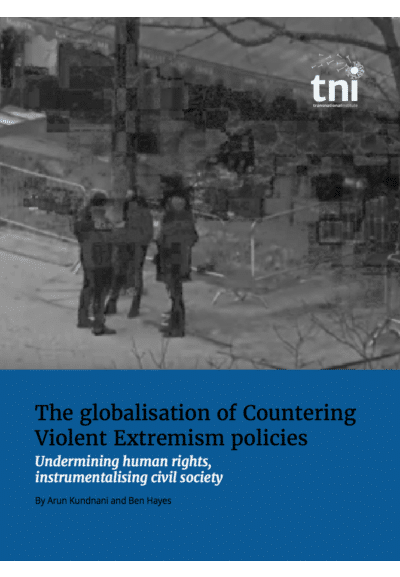 The globalisation of counter extremism is becoming an increasing human rights concern; this is not surprising given that Britain’s failed Prevent counter-extremism strategy is being sanitised and presented as a framework for global counter extremism. This March 2018 report entitled The Globalisation of Countering Extremism Policy: Undermining Human Rights, Instrumentalising Civil Society, is authored by Arun Kundnani and Ben Hayes for the Transnational Institute. It evidences that the most problematic elements of the UK’s Prevent strategy are being transposed and adopted uncritically in CVE frameworks across the world, and then backed with substantial amounts of funding and technical assistance. Including a foreword by UN Special Rapporteur Professor Fionnuala Ní Aoláin, who also endorsed the recent UK’s People’s Review of Prevent, the report “provides a critical account of the emergence of CVE policies and analyses their subsequent institutionalisation within three international bodies: the European Union (see also the Radicalisation Awareness Network), the United Nations’ Office of Counter-Terrorism, and the Global Counterterrorism Forum“.
It notes that under the banner of the globalisation of counter extremism: The problem, it concludes, “is one of supranational organisations – including those with human rights mandates at their core – legitimising these problematic approaches by adopting them uncritically”. This global “CVE-mania” is compounded by “the political ascendancy of right-wing populism and authoritarianism in many parts of the world”. You can find the report HERE. Related Resources