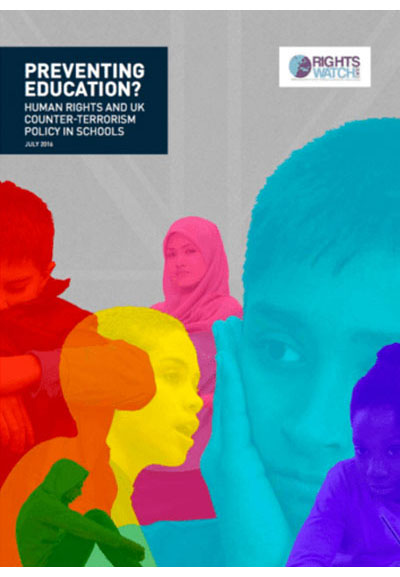 Of key interest to those working on human rights, specifically children’s rights and counter extremism, this report by Rights and Security International published in July 2016, provided the most comprehensive analysis to date of the effect of the Prevent strategy in UK schools.

As early as 2016, RSI concluded by, among other things calling for the Prevent strategy and Channel programme insofar as they apply to schools must be repealed and abandoned.

We recommend that this report is read alongside the Trojan Horse affair podcast, which interrogates claims that teachers at a school in Birmingham were ‘Islamicizing’ the school, paving the way for the Prevent duty to be made a legal imperative in education. This has been happening through the government’s notion of ‘British values’, which we argue are problematic for many reasons.

Featuring a number of case studies of children in schools, this RSI report sets out the key problems in the development of the strategy and its impact on students, especially children, and found that it has been leaving a generation of young Britons fearful of exercising their rights to freedom of expression and belief.

It warned that Prevent risks being counter-productive by driving children to discuss issues related to terrorism, religion and identity outside the classroom and online where simplistic narratives are promoted and go unchallenged.

Notably, the report opens with a quote by Maina Kiai, the UN Special Rapporteur on the Rights to Freedom of Peaceful Assembly and of Association, who, after he visited the UK earlier in 2016, said in a report to the United Nations: “It appears that Prevent is having the opposite of its intended effect: by dividing, stigmatizing and alienating segments of the population, Prevent could end up promoting extremism, rather than countering it.”

The full RSI report is HERE.