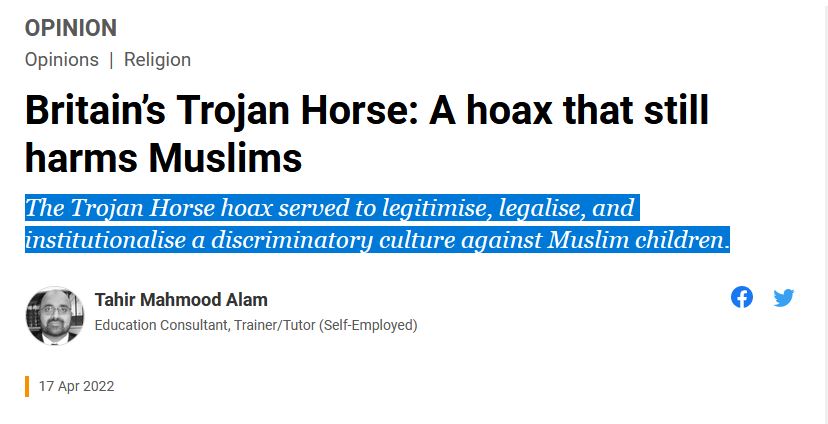 In 2014, sensationalist headlines circulated in the United Kingdom about an alleged Muslim plot to take over schools. The so-called “Trojan Horse” involved “extremists” infiltrating Birmingham to “sow terrorism” in young minds.

As the then chair of the Park View Educational Trust, which ran three of the schools in question, I suddenly found myself in the centre of a media storm, subjected to a multitude of government inspections and inquiries looking into alleged improprieties. It was a classic moral panic.

Subsequently, all of our schools were deemed failures, despite having been ranked as outstanding before. They were placed under “special measures”, which created the possibility of removing senior leadership in the accused institutions.

Of course, we rejected the supposed findings of these inquiries and protested the injustice and abuse of power.

As time rolled on, it became increasingly clear that there was no evidence of “extremism and radicalisation” taking place in the schools, nor was there any evidence of a plot.

Yet, the damage was done. Years of hard work, creating high-performing schools in highly deprived areas, was destroyed through these interventions. In the process, the entire British Muslim community was vilified and cast as suspicious outsiders in their own country.

As one Muslim pupil succinctly put it to a trusted teacher, “Why are they against us?”